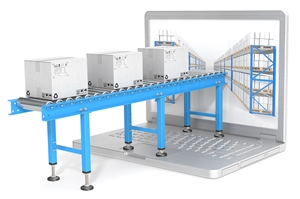 A new patent seems to show Amazon's possible future moves as it gets more involved in logistics. GeekWire recently reported on an Amazon patent for a project that could continue the business' interest in delivery. It could also, as with many other innovations from larger businesses, demonstrate a new approach for logistics companies that want to try similar tactics themselves.
The latest chapter in Amazon's logistics work, the patent corresponds to a new network delivery effort, one which would deliver packages underground. As the source noted, it adds more layers to Amazon's already ambitious plans for logistics, which currently include airborne drones and land?-bound trucks.
According to the patent description, the patent includes multiple functioning aspects, from a "hub" center to a series of underground "conveyers" and "junctions." The advantages would apparently be fewer delays than other modes of delivery and a more simplified means of processing packages.
The system would also involve locker storage for special items. More than one item will reportedly be carried at once on the conveyors through these subterranean spaces. A special control system could also work with the setup, reducing the amount of time involved in each of the delivery actions involved. The underground network represents a new way to bring different objects together and help Amazon theoretically have tighter control over the delivery process.
A part of Amazon's larger plan
There have been reports of the new changes Amazon has made to enter the supply space. Another addition has been a new app that functions as an "Uber for Freight," as Logistics Management reported. The source quoted project44 President Tommy Barnes, who said that the application makes sense within Amazon's existing plans for development.
"Amazon doing this is not a surprise, but Uber for trucking is tougher than those give it credit for but the difference between what Uber and Amazon are doing is that Amazon has a larger endgame in mind," he said. Barnes also referenced the company's ability to "leverage its own network" as it implements these kinds of changes.
Other companies can learn from this example by seeing the value in a comprehensive supply chain approach, as well as a shift in how the business conducts itself in the future to deliver packages to its customers.
Benefits in and outside the company
A Trefis piece on Forbes described some of the thought process which might be behind Amazon's new plans. The article said that the logistics gamble is both for Amazon's own benefit and so it can be a partner for other outside entities.
In all of the different iterations of Amazon's logistics, an additional goal appears to be moving more fluidly to serve recipients in hard-to-reach areas of the world. Spend management and other strategic decisions give businesses a greater degree of control and measure over delivery. Spend management also gives organizations a simple solution instead of a more complex one, allowing them to choose the spend analysis it needs.
Procurement News