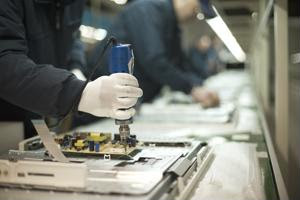 Those who closely watch the consumer product market know that trends in customer preferences and demands have a direct impact on the manufacturing and procurement practices of companies in the sector. When a new item becomes popular - such as the smartphone - companies can't merely reinvent their product lines and begin churning out great numbers of the new gadgets immediately. The research and development stage needs to happen, and a whole host of supplier relationships have to be formed in order for the enterprise to be able to source the raw materials and parts that it needs.

The consumer electronics craze that has been ongoing for the past two decades and recently gained more momentum with the advent of Web-ready mobile devices is driving shifts on a much larger level than many users of the products realize, as these developments occur out of the public spotlight. The need to meet demand for smartphones, tablets and related tech tools has altered the way suppliers and original equipment manufacturers partner with one another, and it's begun to reshape the global manufacturing landscape.

One of the results of the continual need to innovate in the current market has been closer, more dynamic relationships between business partners. Google, the company that developed the Android mobile operating system, and Samsung, which produces many of the most popular devices that run the platform, are a prime example of the trend. According to PC World, the two companies recently announced that they had signed a 10-year agreement to cross-license their patents, including those they already hold and those they'll secure in the future.

"It does make a lot of sense for Samsung and Google to work together more closely. Samsung is really the engine that drives Android, Google's operating system," Canalys Senior Analyst Tim Coulling told the news source.

Meanwhile, the procurement network of Google's top competitor, Apple, is undergoing major changes. According to The Wall Street Journal, the Cupertino, Calif.-based tech giant's partner Hon Hai, which is based in Taiwan and also goes by the name Foxconn, recently began considering moving some of its production processes to the United States, particularly for its larger, 60-inch liquid screens.

It's unclear whether any of the items the firm manufactures for Apple would return to the U.S., but as the supply chain continues to shift, nearshore manufacturing by way of an international supplier might not be such an uncommon phenomenon.