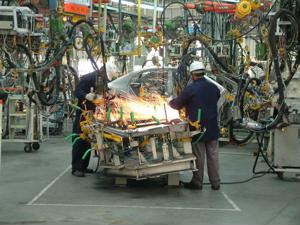 After being one of the hardest-hit sectors during the Great Recession, the automotive industry has been returning to form over the past several months. The factors driving this growth are complex, and it would be impossible to attribute the phenomenon to one particular cause. Increased confidence in the consumer product market is certainly a contributor, as the financial crisis and the job losses that began in 2008 made many people skittish about buying big-ticket items like cars.

But increases in sales don't simply create themselves. Surely the fact that consumers are purchasing more vehicles again is due in part to the efforts of companies in the industry to appeal to the public and meet its demands. Furthermore, the sector's growth reflects manufacturers' success in their new strategies to increase productivity and reduce business costs.

Many of these advances have taken place on the ground level, impacting the production of vehicles and parts. Companies have had to get by with leaner teams, and they're doing this in part by leveraging cutting-edge technology to bolster productivity.

Signs suggest that technological innovation in auto manufacturing is set to continue in 2014. Researchers at the Fraunhofer Institute for Machine Tools and Forming Technology recently announced that they developed a new method for car assembly that is designed to reduce manufacturing times and allow for higher-output production. With this new technology, parameters that once had to be manually set and calibrated by employees can now be automated, allowing a greater number of elements in the manufacturing process to be moved to mass production.

"We hope to be able to reduce the start-up times by up to 50 percent," said Marco Breitfeld, a Fraunhofer Institute researcher.

By speeding up production, the breakthrough that Breitfeld and his team have developed promises to help auto companies keep manufacturing costs down.

But innovation doesn't end with monetary savings. Creative thinking also has to be applied to the products themselves, and United States automotive giant Ford is doing just that.

According to GreenBiz, the company is set to showcase its newest eco-friendly vehicle this month in Las Vegas at the Consumer Electronics Show. Ford's C-Max Solar Energi rethinks green transportation, utilizing a solar canopy as a power source rather than the more common electric grid model.

The advances that auto manufacturers are making is a reminder that challenges can drive innovation, and as the sector continues to improve over the coming year, it will remain crucial for companies to implement creative strategies and green procurement practices.