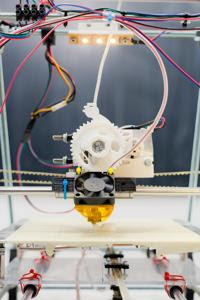 Technology has long been a source of inspiration for manufacturers looking to streamline their production processes and minimize costs. In recent years, arguably the most transformative innovation to hit the manufacturing industry on a large scale has been three-dimensional printing. 3D printers are already a staple at many plants and production facilities, and they've also considerably increased the types of resources that are available in the health care field.

But in order for any given technology to reduce business and manufacturing costs, and streamline operations in the long term, it has to be adapted to the shifting needs of companies. 3D printers are no exception to this rule - in fact, new developments with these tools will likely continue to drive market changes and increase enterprise agility.

According to Computerworld, scientists at the Lawrence Livermore National Laboratory are looking to create more powerful 3D printers capable of producing a wider range of items. These innovations promise to allow manufacturers to achieve a higher level of operational excellence in the future. The researchers are attempting to update 3D printing - also called additive manufacturing, as its basic function is "building multiple materials into the same product," the source noted - to a point where it can produce powerful yet lightweight materials for military use, as well as for building automotive and aerospace parts.

Eric Duoss, an engineer and materials scientist working on the project at Livermore, told Computerworld that the technology will likely "revolutionize manufacturing."

"Hopefully it will be a new way of manufacturing with a lot more possibilities and less cost, time and real estate needed to manufacture things," Duoss told the news source. He also noted that the new process will allow for combinations of materials that were once outside the realm of possibility.

The kind of impact that Duoss predicted his team's research will have may not be limited to production processes. In a column for Forbes, business and technology writer Rakesh Sharma suggested that 3D printing would drive the ongoing creation of decentralized manufacturing hubs that would reshape supplier networks.

"These hubs ... would cater to specific geographies," Sharma wrote. "Think of a local manufacturing hub for your Nike shoes or Jensport backpacks. This will enable manufacturing organizations to rapidly test and craft prototypes based on consumer feedback."

If Sharma turns out to be correct, the push toward local manufacturing may also make sustainable product sourcing a much more manageable endeavor for many companies.