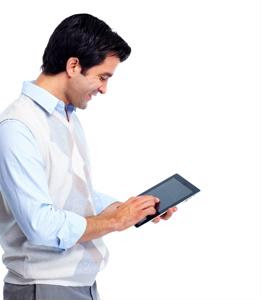 Apple's supply chain could be feeling pressure from consumers, as sources revealed one of its suppliers will be cutting production for iPad components. Sharp, which supplies Apple with its 9.7-inch iPad screens is rumored to be limiting manufacturing of the parts dramatically, which could mean Apple has plans to produce fewer of the electronics moving forward. Sharp's production is said to currently be running at the minimum level. The news of limited iPad production comes just weeks after rumors surfaced that the company was slashing orders for iPhone 5 components, due to limited consumer demand.

There could be numerous reasons surrounding Apple's limited procurement of the screens from Sharp. The company may be in the process of obtaining a new suppliers, as they were recently reported to be eliminating Samsung as one of their major partners, due to legal battles the two rivals have been involved in. However, the company has not confirmed that it is seeking a new producer for the iPad panels.

Another explanation could be less consumer purchasing, due to limited seasonal demand after the traditional Christmas rush or a preference for other products. While the full-size iPads were highly desirable when they first hit the market, consumers may now be purchasing more iPad Minis, which could have created a shift in customer demand Apple was not prepared to handle.

This unexpected demand change could also be due to the iPad Mini's introduction to the Chinese market and the new popularity of the product within the country. The device's lower price point and consumer appeal could be leading more to prefer the smaller iPad to its larger counterpart. However, reports don't specify if Sharp has slashed its production on the larger screens to increase output of the smaller iPad components.

Apple could be headed for a struggle as it attempts to compete with other electronics manufacturers that attempt to provide consumers with lower prices and high quality products. Samsung, Amazon and Google are just a few companies looking take some of Apple's market share with their newly released smartphones and tablets. If Apple continues to struggle and limit production due to increased competition, it may need to develop strategies that will lower its cost of production and limit its prices, making its goods more accessible to consumers.