...and now you don't! US Defense Department investigates Self-Destructing electronics 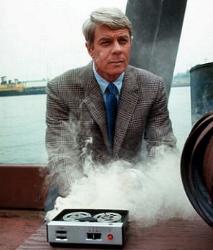 If you have ever seen an episode of Mission Impossible, you should know that the beginning sequence inevitably ends with a cassette tape (remember those?) delivering a top secret message, with the ominous final warning, "This tape will self-destruct in 5 seconds..." While many presumed "advances" in spy gadgets seem tied to James Bond, and the 007 franchise, this simple concept of disposing of secret information currently holds the attention of the US Defense Advanced Research Projects Agency (DARPA), who has dubbed this yet-to-be-developed technology as "Vanishing Programmable Resources" (VAPR) In an effort to determine the feasibility of such devices, DARPA is sponsoring a Proposers' Day to invite conversation and insight from the technology community.

With a trend of outsourced manufacturing activities in the electronics market, and the continuous globalization that is especially prevalent in the technology industry, the question becomes: What are the real implications of such devices being developed, and what would they look like?

Old School - Tapes/CDs:
The possibility of the intelligence community using self-destructing cassette tapes would be much greater if anyone still owned a cassette player, but in the constantly evolving world of streaming media and near-immediate transference of data, it is not likely that the solution would take this kind of form. In addition to its outdated nature, such devices would require significant destruction methods with controls to ensure the message could not be recreated, or destroyed before being read.

Bio-technology:
The technology world has long kept a focus on bio-technology, with the Defense Department
already investing in the research and testing of nano-sensor technology, imbedded in the human body.
Prototypes have already been in the works, though DARPA has indicated in their VAPR Proposers' Day information that there has been sub-standard performance of fast-degrading, bio-electronics.

Information direct:
While the idea of host-imbedded receivers may seem like science fiction, the ability to "beam" information directly to the human brain may not be so far-fetched. Such devices are already being utilized in the medical space to assist with brain signaling for patients with degenerative brain disorders. While this application is somewhat different than the Mission Impossible-style designs for the defence department, there still appears to be the potential to adapt this technology to a defense application.

As with all Defense Department contractors, security is of chief concern, and development of such
devices would require a level of confidentiality. As such, a problem may present itself when
trying to determine how such a device is manufactured, once it is identified. When dealing with
National Security, and confidential information, it is safe to say that offshore manufacturing may
not be an attractive option.


Regardless of the way these devices might be created, it seems to be a straightforward goal, and
one which the technology industry is well equipped to develop. So the next time you notice a
a stranger's Bluetooth melting on their ear, remember to look the other way. Spies don't like being
noticed...