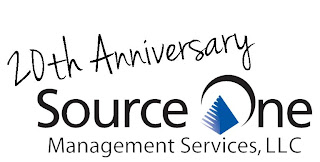 This year marks the 20th Anniversary of Source One Management Services, LLC, originally founded as an advocate for buyers.  To celebrate this 20-year milestone, Source One has produced multimedia timeline that depicts the company's simple beginnings and its history of strategic sourcing and procurement success.  Since 1992, Source One has evolved into an experienced procurement services provider, having sourced billions of dollars in products and services for leading global companies.  To date, Source One has negotiated with thousands of suppliers around the world and has achieved over $1 billion in cost savings for its clients.

“In 1996, Dataram engaged Source One initially to analyze our telephone systems and Abe was able to cut our costs.  As our relationship with Source One continued over the years, Dataram has saved a lot of money and streamlined operations.”  Mark Maddocks, retired CFO of Dataram Corporation

“Goldman Associates was experiencing significant phone problems in 2001 and one of our partners referred us to Source One. Goldman benefited from Source One’s ability to negotiate pricing and accessibility if there were questions or problems.” - Melissa Williams, former VP of Operations for Goldman Associates

“Our corporation never could have resourced this effort with available personnel. By outsourcing portions of our procurement cycle, we achieved savings that would not otherwise have been possible. In addition, we learned things about the marketplace and our own operations that make us better purchasers for future efforts in other areas...” - John Ragazzini, CFO of Spraylat Corporation

Recognized as a leader in the procurement and supply chain industry, Source One looks forward to 20 more years of success!