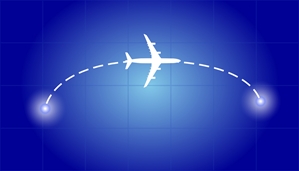 Across the globe, organizations at every level are struggling to deal with the rising threat of cyberattacks. As globalization continues, technologies advance and business applications reach new heights of connectivity, companies are finding it more difficult to ensure end-to-end protection. The risk landscape leaves virtually no industry untouched.
This is why aviation regulators in the U.S. and Europe are turning their attention to enhancing the safety of airline data-transmission systems, The Wall Street Journal reported. One system in particular is of utmost concern: Aircraft Communications Addressing and Reporting System, otherwise known as Acars. So far, there have been no reported incidents of the data and information exchanged on the network being compromised. However, because it is an outdated system, concerns that it could be a target for hackers have been raised by both U.S. and European authorities, the source indicated.
Over the past few years, it has become abundantly clear that cybercriminals are rapidly advancing in their capabilities and motivations. And some of the biggest vectors of attack are platforms that are loosely monitored and maintained. As The Wall Street Journal explained, if Acars were to be penetrated, it could cause massive disruptions for airlines and affect a number of operations.
Outdated systems pose security risk
In a recent article for Fast Company, Steven Melendez pointed out that, although none of the many computer-related disruptions airline giants such as Delta and Southwest have experienced within the past year have been the result of a hacking attempt, it is only likely only a matter of time. For example, Melendez explained, the Government Accountability Office released a report recently saying, essentially, that the more connected airline systems become, the higher the risk of them falling victim to cyberattacks.
Last month, Astronautics Corp. was given a contract by the Federal Aviation Administration to create tools that would help uncover security vulnerabilities in aircraft technologies. And it seems that the first system to be assessed with these tools was Acars. In addition to examining and evaluating the security risks of existing systems, The Wall Street Journal revealed that both the European Aviation Safety Agency and FAA are working on developing more modern, innovative technologies for air traffic control and communication. These efforts for safer aviation systems also include plans to revamp guidelines and certification requirements for the industry.
Ensuring protection
These moves taken by regulators in the aviation industry show the growing concern - and urgency - for companies across the globe to update their technologies and digital tools. Furthermore, as connectivity and integration continue to increase among organizations, ensuring safe, sound protocols are implemented becomes increasingly necessary - not just for internal operations, but for those throughout supplier and partner networks as well. This is especially true for applications and devices that store and exchange data, as well as those that handle private and sensitive information, such as financial transactions.
Maintaining proper monitoring and threat detection tools is necessary for companies to defend networks against today's aggressive cybercriminals.
Procurement News