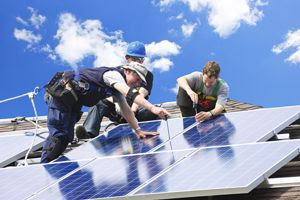 While electricity sourcing from storage technologies for renewable energy is only emerging, it could soon become mainstream. Inspired by electric car energy storage, tech companies are providing customers of residential solar systems with batteries that can store solar power, according to Fortune Magazine.

Companies including Bosch and electric car manufacturer Tesla are working toward advancing storage devices by providing consumers with lithium ion battery storage systems that can help power homes when the sun is not shining, such as when it's raining or there are cloudy weather conditions.

The battery storage system also has the potential to give consumers more control over their energy consumption to save money. For example, in the case of markets where utilities charge more for peak electricity usage, a homeowner with a residential solar system can store electricity for when rates are minimal and use this extra power during periods of high demand. As a way to reduce operating costs for a business, energy storage could give firms better control over their energy usage.

Energy storage could also be a two-way street in storing energy and giving it back. Residential and commercial property developer Konterra recently had a renewable energy storage system installed that is multi-functional, according to Business Insider. The system's transformer functions to give the Konterra building four hours of backup energy in case of a power outage.

The Solar Grid Storage system not only stores energy generated from the building's rooftop solar panels but also transfers power to the building itself or the local grid. While energy storage systems are expensive, they are also becoming more cost effective.

"When you can really squeeze value out of [renewable energy], it will revolutionize not just solar, but the way the grid operates," Scott Wiater, president of Standard Solar, told GreenTechMedia. "You'll see lots of distributed generation and microgrids, and the grid will be more of a backup."