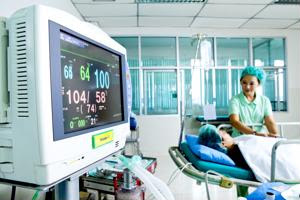 While hospitals are bracing for the financial impacts of the Affordable Care Act, they might find themselves re-evaluating their budgets. Energy costs - a sizeable part of any hospital's expenses - can often be significantly reduced in order to reinvest cost savings back into their organization.

Hospitals could save $740 million in energy costs each year if they boosted their energy efficiency by 10 percent, according to the Environmental Protection Agency.

To help achieve these cost savings, Energy Star revealed tools to measure building performance and reduce energy consumption. As a major consumer of electricity, Connecticut's Greenwich Hospital contributes to the $8.8 billion spent nationally on energy costs per year by U.S. health care facilities, according to Green Biz. Using Energy Star's rating, the Greenwich Hospital scored 47, which is 28 points away from receiving an Energy Star Designation. However, after working to improve its energy efficiency initiatives, the hospital was able to save $303,000 on electricity and more than 1.7 million kilowatt hours per year to earn a rating of 88.

Through boosting energy efficiency by 10 percent, hospitals could save 7.3 billion kilowatt hours of electricity - cutting the same amount of greenhouse gas emissions generated from over 712,000 homes, according to the EPA.

In an interview with Health Facilities Management Magazine, National Program Manager for Energy Star Commercial Buildings Clark Reed told the magazine hospitals are likely to see energy efficiency as a growing priority. He said there are three main factors that contribute to this: declining Medicare reimbursements, increasing energy costs nationally and a growing desire for hospitals to become more sustainable overall.

Reed suggests that implementing more sustainability initiatives in hospitals can start with institutional and policy changes. Executive leaders can create written policy changes to save energy and designate duties surrounding energy saving initiatives to staff, including an energy director if they choose, to keep their energy conservation efforts geared for the long run. Recording a benchmark for energy usage to help set goals and determine where they stand among the competition calling for the need for energy audits is also an option.

"For instance, benchmarking against the industry can provide key insights into the competitive use of energy," Reed told Health Facilities Management Magazine. "A hospital may learn that it's using more energy than average and set an initial goal of becoming average. Then, when that is reached, strive to become best-in-class by performing in the top 25 percentile nationally."

Reed believes energy reports are key in keeping hospitals committed to their energy saving goals, whether they are in the form of monthly, quarterly or annual reports. As workers are provided with incentives to save energy or have their performance evaluated based on energy saved, the organization is likely to benefit from internalizing their sustainability goals.

In addition to changes within the staff and hospital policy, health systems can invest in new energy efficient equipment for retrofitting, including lighting. Reed said manufacturers are enhancing the performance of light emitting diodes (LEDs) to become more efficient while also developing them to become more versatile to be used in any hospital setting.

Retrofitting can result in a significant impact to cost savings for hospitals, according to a guide written by the National Renewable Energy Laboratory and the Rocky Mountain Institute. The guide suggests that hospitals look into retrofitting multiple pieces of equipment or building components instead of individually in order to reap the most energy savings. By seeing how retrofits combine to accumulate energy savings, hospitals can decide how to best approach retrofitting.