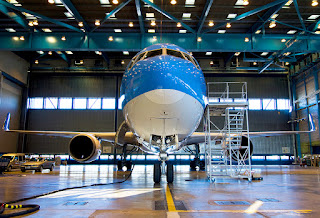 Since airline deregulation in 1978, the civil aeronautical industry/market has been growing steadily, reaching altitudes that many other industries lack the thrust to attain. Airlines, Manufacturers, and Maintenance Service companies are flying in clear skies with no turbulence in sight. Airline passenger traffic is foreseen to double within the next 20 years; while order books are secured for the next 8 years for the manufacturers, spurring the Maintenance, Reparation and Overhaul (MRO) market. The sector’s strong performance is well-known by the industry experts, creating strong competition between experienced players who fight to reinforce their position in the market; while new player are “on the tarmac, ready for take-off.”

The projected growth of passenger flight traffic through 2034 will have a positive impact on the MRO market. The commercial civil plane fleet will increase from 26,000 existing planes today to 40,000 by 2040. That’s a lot of planes to maintain! The increasing number of planes in service boosts the MRO market directly associated to it. According to recent studies from IATA, the MRO market is expected to grow from $62.1 billion in 2014 to $90 billion by 2024, despite the fact that 6,400 jets and turboprops will exit the market through 2022. MRO represents 10% to 15% of the total cost of ownership of an aircraft over its 20- 30 year lifetime; and recent and more fuel efficient aircraft are more likely to push the lifetime of aircraft to 45 years. Maintaining newer airplanes, equipped with more complex technologies, brings new challenges to airline companies. Even though manufacturers provide maintenance and reparation instructions, the electrical, numerical, and composite technologies new planes are equipped with and the associated MRO services generate a need for more skilled personnel. Airline companies already tend to outsource their MRO services in order to focus on their core business, and this tendency is intensified by this need of MRO services expertise.

So, how is this happening? According to same studies the number of airline passengers is projected to reach 7.3 billion travelers by 2034, representing a 4.1% average annual growth, and resulting in more than doubling the current number of 3.5 billion peoples going through the airport doors this year. This increasing demand originates mainly from the Middle-East, India, and Asia-Pacific, including China. Indeed, China is foreseen to become the world’s largest passenger market by 2030 with an estimated 1.3 billion passengers annually versus 1.2 billion passengers for the U.S., the current largest passenger market. In order to respond to this increasing demand, mainly for short-haul and medium haul flights, airlines will have to buy new planes, equipped with the most recent technologies, while maintaining their current fleets.

As a result, manufacturers like the Brazilian Embraer, the Canadian Bombardier, and new players, such as the Chinese COMAC, are investing massively into getting a bigger slice of the pie – currently dominated by the two major commercial aircraft manufacturers Boeing and Airbus. The 51st international Paris Air Show held at Le Bourget, France in June 2015 reflected this market domination by the two giants – out of a total of 1,223 commercial airplane orders and commitment of orders (representing 13 more aircrafts than the 2014 Farnborough Air Show), 755 orders were placed at the Chicago and Toulouse headquartered giants (331 for Boeing, 421 for Airbus). These orders, in addition to what was already closed before the show, secured order books for the two giants for the next 8 years (6,300 for Airbus, 5,700 for Boeing). Paradoxically, their current dominance in the market exposes them to competitors. Those airline companies who were unable to secure orders with either Boeing or Airbus and are unwilling to endure an 8 year waitlist turn to other manufacturers who can provide more timely service. In response, Boeing and Airbus are working to accelerate their production rates. Airbus, for example, has set an objective to speed up their monthly production from 42 planes per month in 2013 to 50 planes per month by 2016. This challenge impacts subcontractors as they will have to adapt to keep up with their client’s needs.

As financial resources of airline companies are combined with MRO organization, MRO hubs are established, as it already exists in Miami, Florida, allowing significant investments in centralizing equipment and developing skills, making experienced personnel more available, and thus increasing MRO services efficiency while reducing its cost.  The MRO AMERICAS exposition in Dallas, TX on April 5-7 2016 will be an event to look forward to  and attend for all players involved in this market who wish to develop knowledge, connection, and find solution for current and future challenges.

Read also: What is MRO applied to the Aeronautical Industry - Why Strategic Sourcing can be the best set of wings for airline companies