Home Best Practices The Earthquake, the Hurricane, and the Supply Chain

The Earthquake, the Hurricane, and the Supply Chain 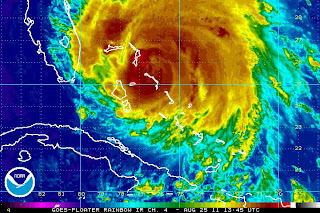 It’s not the much-ballyhooed end of the world, but the East Coast has been the target of several natural disasters of late. First a 5.9 earthquake hit Virginia on Tuesday, and now Hurricane Irene is on her way to ruin everybody’s weekend. Pile that on top of record rainfalls, which has made the ground soggy, and many trees might be coming down as the storm rips through the area, causing all kinds of havoc.

As the weather reporters inform us ad nauseam, the time to prepare is before the storm hits. It is far too late to do much specifically (other than ad-hoc solutions which will cost your business quite a bit of money) for this go-round, but between the Japanese Earthquake, The Virginia Earthquake, and Hurricane Irene, there are several supply chain lessons to learn and implement. I will concentrate on the three most important here.

While Japan is prone to earthquakes, a 9.0 quake is a rare event, and Japan’s emergency and safety systems were shown to be lacking for such a magnitude. And who could have possibly anticipated a 5.9 quake on the East Coast? Thankfully the designers of North Anna nuclear power plant in Virginia did. The plant’s safety systems, designed to withstand a 6.0 quake, are working as planned, but this quake was at the outside of the planning envelope; any stronger, and we could have had some serious Japanese-style nuclear trouble.

Also, Hurricane Irene is coming much farther north than most other hurricanes, and the latest data from the National Hurricane Center projects a direct hit on New York City, with much of the most-populated areas of the East Coast directly affected. Can your supply chain handle a shock like that?

Earthquakes and hurricanes are, quite literally and in contract-definition terms, “acts of God” (or mother nature, or the universe, however you wish to designate them; they sure aren’t man-made). The conditions governing these events are spelled out in the Force Majeure clause of most contracts.

While there are events that are actually outside of a supplier’s control, you don’t want those clauses written such that the cost of bearing those burdens is passed onto you. For example, in your next round of contract negotiations, watch out for wording that defines “acts of God” too broadly. We know of one supplier who tried to claim that temperatures in excess of 100 degrees constituted an act of God (we have had several such days like that, all across the country this summer), and tried to invoke Force Majeure.

Another thing to watch out for in the Force Majeure clause is wording which stipulates that the supplier may halt service, but the buyer must continue to pay according to the agreed-upon schedule. In other words, the supplier gets paid for doing nothing. Not a good savings generator.

If you have a sole source for a category of spend, and if that sole source has one warehouse in New Jersey, more than likely your supply in that category will be disrupted this weekend. This does not bode well for order fulfillment Monday morning, or for several weeks thereafter.

Make sure you have redundant supply chain capabilities, either by using multiple suppliers, or by using a supplier who has multiple facilities, and can fulfill orders from another location, if necessary. You may experience a little bit of a time hit, but you won’t be shut down completely.

Prepare Before the Event Strikes

If you take away no other lesson from this week’s Earth-generated events, it is to take these possibilities into consideration while you are negotiating your next contracts. You have plenty of leverage with suppliers by invoking these natural events to get favorable terms in relation to the above-mentioned clauses, and others. It is a legitimate question to ask suppliers how they would handle such eventualities. Such events are not just the plot-drivers of so many recent movies; it could happen to you, tomorrow.
Best Practices