Joe Payne on Wednesday, August 31, 2011 Best Practices,
In times of crisis, leaders can often be heard saying, “We hope for the best but we prepare for the worst”. In the case of the contract between Accenture and the City of Chicago, it’s clear that one party kept this mantra in mind.

Exhibit 2 of the Chicago/Accenture contract provides context to the rules surrounding early termination. Both the City and Accenture can terminate the agreement (for convenience/without cause), upon 30 days written notice. No penalty fees will be incurred for early termination; however the City is required to compensate Accenture for fees due up to the date of termination.

The agreement also allows Accenture to terminate with cause in the event that:

The minimum termination schedule starts in September 2011 and ends in October 2012, and each month has an amount in it ranging from a low of $128K to a high of $934K, as well as a totaled amount of $8.2 million listed at the bottom of the chart. Since the numbers are totaled, it’s a good bet that if the agreement is terminated in October 2011, the fees due will be September + October, in this case, $1.155 million. Not bad for two months work provided by…how many resources? 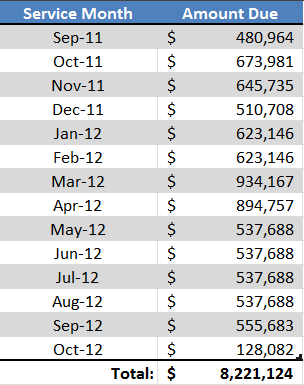 The minimum termination schedule is telling in that it gives an indication of how much, minimally, Accenture expects to make on the deal over the next year- $8.2 million. Anything above this amount will be gravy.

The termination clause, as outlined above and as written is probably one of the most lopsided clauses we have ever read. Accenture can terminate with or without cause, and they still get paid. The city can terminate at convenience, and they still have to pay. Yet there is nothing in this agreement that defines how the City can terminate with cause and without penalty; the contract is moot on that point. Once the City signed the agreement, Accenture was going to make money, regardless of how much or how little savings were actually achieved.

The applicability of a minimum amount due in a contingency agreement aside, the three reasons defined as “cause” by Accenture also come into question.

This is a fairly broad statement. Normally a contract would define precisely what conditions need to be met in order for an agreement to be terminated due to financial conditions. Some metric, such as bankruptcy, should be provided. Otherwise, any negative report on the City’s finances could be reason enough for Accenture to bail (and get their minimum payment).

This rationale for cause puts tremendous risk on the city. The people in AP who are responsible for writing the check to Accenture had better be on their game. One slip up, particularly in March or April when the minimum fee schedule peaks, and the folks at Accenture may decide their services are better suited elsewhere.

This statement, like the first, is way too broad for us. After all, who defines what is reasonable? Let’s say the City can only find $400 million in addressable projects. Accenture gives notice and then what? The project is cancelled because there is not enough spend, AND Accenture still gets their minimum (yet still substantial) fee up through that date? It doesn’t seem rational that a City looking to reduce costs will be penalized for not having high enough spend. Yet that is how this contract is structured. That aside, the clause may work in the City’s favor, as I would guess Accenture meant for this clause to say “at least $500 million” rather than “up to $500 million”.

Now, is it likely that Accenture, acting in good faith, would terminate this agreement with cause due to any of the clauses provided above, just to get the minimum fee dictated by the agreement? Probably not. But just as we have seen with pretty much everything else in this contract, the concept of risk and reward is clearly spelled out. And in every case, the risk goes to the customer, the reward to the consultant. The only guarantee is that Accenture will get paid.

Stay tuned for our last post on the Chicago/Accenture contract where we will answer the real question, are Chicago taxpayers likely to get what they pay for?