Diego De la Garza on Wednesday, February 09, 2011 Best Practices, IT,
When we hear the term “economic crisis” most of us think of the commercial and housing market fiascos of 2008 and we shiver, trying to move ahead with our lives, secure our jobs (or keep looking for one) and find better opportunities to save money and regain financial stability. And for many of us, this strategic approach makes perfect sense.

There is a common misconception that the word “crisis” in Chinese means both “danger” and “opportunity” (when in reality its closest meaning would be “crucial point”). Still, some people don’t think twice about it and embrace this definition regardless of its accuracy. This is the case of today’s wealthiest tycoon Carlos Slim (Net Worth $75 Billion), who has decided to use the global crises to his advantage. For more than forty years he has defied our so-called reasonable approach when facing crises -- and proving us wrong every single time -- by going the opposite way and profiting from these critical scenarios. He has done it twice already in large fashion and is about to do it again.

During the early 1980’s Mexico faced a major debt crisis where many companies’ stock prices began to plunge and international capital was leaving the country. Slim decided to take a risk and invested much of his money on sale price stock, purchasing controlling stock in restaurant chains, department stores, hotels and paper mills that some years later he would consolidate. This would eventually become Mexico’s largest conglomerate: Carso Group.

He did it again during the 90’s when his team of investors won the bid for the state-owned and highly troubled Telmex - the country’s largest telephone company. These were times when Mexico was facing a terrible economic and political crisis. Between 1994 and 95, Mexico’s population witnessed the assassination of a presidential candidate, an insurgent rebellion declaring war on the government and the worst currency value loss in decades (the ratio of the Mexican peso to the Dollar went from 4:1 to 7:1 in less than ten days).

During the next few years, while the country was trying to recover and repaying billions in debt to foreign institutions, Telmex stock market value skyrocketed -- going from roughly $7 Bill to over $40 Bill. Since then, Slim’s portfolio has grown to over 200 companies, (including the largest non-profit organization in Latin America). Subsequently, he split his holding unit into three major branches (Telecom, Financial Group and Carso) and decided to invest capital into Saks Fifth Avenue (He is the biggest shareholder of the company at 17.6%) - just to name a few.

These days Mr. Slim is ready to face the current economic recession in North America by investing roughly $8 billion, mostly between Mexican telecom corporations with an established international presence and new ventures to promote Latin American development and employment generation. Recently, Slim has been criticized for amassing his fortune in a developing country and for not pledging to donate most of his fortune philanthropic causes as have many other billionaires (Warren Buffett, Bill Gates, Mark Zuckenberg, etc. are signatories to the “Giving Pledge”). Instead Slim argued that his most ambitious project today is to incorporate a new (for-profit) company that will build infrastructure projects in the mogul’s country, such as dams, toll roads, hospitals and universities, as well as restoration projects. These will generate permanent sources of employment, improve communications and infrastructure, provide better education and reduce emigration to other countries. From his perspective, these efforts would generate better results than any charity projects.

Slim has already begun to prove his point and started this initiative by building what many people consider to be the “Mexican Rockefeller Center.” Take a look at the building complex below; the investment includes the funky looking building you see on the lower right corner: a six story museum exhibiting the 64,000 piece art collection of the magnate’s daughter and the place where his financial group celebrated its 45th anniversary last December. The project was completed in record time; I guess that when the wealthiest man has a project, his $74 Billion will suffice to get things done right…

..And yet, here we are with our “big” projects dreaming about premium cell phones and cable TV. 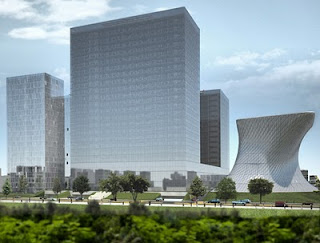