Home Procurement News A glimpse into the restaurant supply chain

A glimpse into the restaurant supply chain 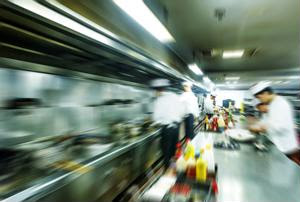 Restaurants are a luxury in our society. From fast-food chains and diners to the new fast-casual restaurant and fine dining - people have a lot of options and flavors from which to choose. Sometimes these choices can be overwhelming, and deciding on a place for dinner can cause a fight, but Americans are lucky to live in a society where they can pick a style of food and go enjoy a different kind of cuisine every night if that's what they want.

As far as the restaurant supply chain is concerned, there are many cogs in the machine that make a given eatery operate. Some rely on linen services while others need large quantities of oil and the list of options could go on. As with many other industries, restaurant supply chains are trying to keep up with the changing times and deal with whatever new change comes in their direction.

Here's a glimpse at some of the issues and evolutions that are currently affecting dining services across the country.

1. Scrambling to find solutions
Breakfast joints, bakeries and bourgeois eating establishments around the globe are feeling the pain from the increasing price of eggs. The H5N2 virus, known colloquially as avian flu, has wiped out 44 million egg-laying chickens, which comes out to roughly 13 percent of the flock that supplies eggs for grocery stores and supply warehouses, noted Nation's Restaurant News. Chickens raised for meat, however, have mostly been spared from the virus.

As a result of this, egg prices have risen significantly across the country. The average price per dozen as leapt up by 70 percent, going from $1.19 to $2.03 for a paltry 12 eggs, as reported by NRN. Some suppliers are considering importing eggs from other places because they are worried that restaurants won't have the ingredients they need to make their food and sustain business. The source indicated that getting foreign foodstuffs into the country is a long and difficult process and it can take years to pass through all the proper inspections just to let it on to American soil.

Experts believe that this round of avian flu came through as flocks of Canada geese passed through areas to move south for the winter, NRN continued. Luckily, as the weather warms, the virus goes defunct and it stops functioning altogether at around 85 degrees Fahrenheit. Hopefully as the summer continues the country can get rid of the flu and work on increasing the hen supply.

2. On-demand food is on the rise
Restaurant delivery is not a new concept, but the locations that offer takeout and delivery options are certainly evolving. According to U.S News and World Report, an increasing number of eateries are adding takeout and delivery options to their business models. Many restaurants - ranging in food offerings, size, quality and location - find success with marketing themselves as places that offer take-away or delivery.

Recently, family restaurant chain Olive Garden found that it could come back after multiple quarters of losses by building up its takeout service, noted Fortune. Originally, higher-ranking staff figured that they could get more people in the door by offering two-for-one deals and all-you-can-eat-style lunches. However, this was not as big of a draw as they hoped, but the chain did see a glimmer of hope in takeout. Now, even though its numbers haven't increased very much, consumers are very fond of the idea of ordering out and taking it back to their homes.

And for people who want to eat Olive Garden food but don't want to dine in the building or drive to pick up their takeout orders, larger cities are seeing Uber services pick up food from restaurants that don't deliver and driving them to the customer, reported Engadget.

3. Changes in fast-food chains
Just like many industries around the country and across the world, fast-food chains are experiencing pressure from the economy and their clientele to better themselves or else. Food Business News recently reported that while more people are employed and enjoy decreases in gas prices, they aren't exactly flocking to just any old restaurant. Customers want to get their most for their money and that doesn't mean more to eat, it means better quality and more healthy food options. These days, consumers want antibiotic-free chicken and GMO-free ingredients going into their food. As long as these needs are met, the restaurant industry can expect a boost in revenue.

And as people's expectations for the ingredients change, so will the dining experience. More customers are drawn to the fast-casual style of food. People enjoy building their meals, like deciding what does into a burrito or choosing a two-for-one option, FBN noted.

As suppliers rush to keep up with the growing demand, we can expect the restaurant supply chain to satisfy the appetites of owners, chefs and diners alike.