Home Unlabelled Will the manufacturing skills gap decrease in 2015?

Will the manufacturing skills gap decrease in 2015? 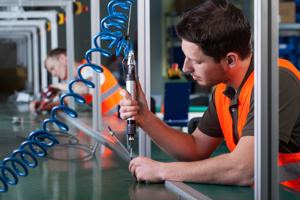 In regard to general complaints regarding the lackluster nature of the United States manufacturing employment rate, it's clear that spend management departments have the resources available to hire new workers.

The thing is, these budgets are allocated for employees possessing high-demand skill sets. Domestic production companies are introducing the Internet of Things, robotics and big data into their primary operations, making these three technologies the central cog in a wheel that keeps spinning.

The Wall Street Journal noted statistics developed by Accenture PLC and The Manufacturing Institute, which found more than three-fourths of U.S. manufacturers reported having difficulty finding capable personnel, although the news source maintained that a number of economists are skeptical of this figure. Why the doubt? There are still millions of people who are unemployed, so it's a wonder as to why production companies are having trouble perusing a massive labor pool.

A number of factors could be causing these real or perceived labor issues. It could be that some manufacturers simply aren't encountering qualified workers or that people aren't looking for jobs at production plants (although this latter speculation is unlikely).

However, Manpower chairman Jeffrey Joerres maintained that employers are more cautious about hiring new talent now than they were before the recession, which is indicative that the economy hasn't fully recovered. Human resources departments often look for those "perfect hires" that represent low risk to their businesses' profitability.

The sentiment among analysts such as Manufacturing.net's Bridget Bergin is that 2015 will be pretty much the same as last year, if not a little worse. In order to improve this condition, she emphasized the need to develop vocational curriculums that focus on building factory skills. These programs won't be easy by any means, as the high-tech equipment used by most production companies requires basic knowledge of design and programming.

With this education in mind, it's important to note that people aren't going to spend the energy and money for these courses without being duly compensated. This issue goes beyond paying workers at higher wages or salaries, and concerns providing them with comprehensive insurance packages that cover health, dental and possibly life if the job is dangerous.