US defense spending: Increasing or retracting? 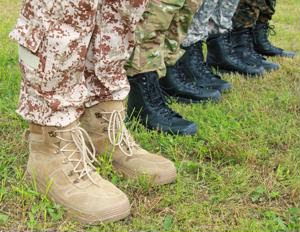 Spend management is a critical component of the United States government's military considerations. Equipping personnel with quality equipment is a necessity, but pressure from legislators can suppress expenditures.

That is why officials from the Pentagon often make thorough assessments of not only how much the Department of Defense, its subsidiaries and other agencies spend on materials and operations, but also how well personnel are performing as a result of those expenses. Purchasing requires comprehensive analysis of all angles.

US military may receive leeway

Bloomberg's Roxana Tiron acknowledged speculations from House Armed Services Committee Chairman and Texas House Rep. Mac Thornberry, who maintained that the U.S. military will likely be relieved of past spending caps in light of concerns about everything from cyberterrorism to nuclear weapons threats.

"On both sides of the aisle, there's widespread agreement that the resources going to the Pentagon are not enough to meet that wide array of threats," said Thornberry, as quoted by Tiron. "If you got Republicans and Democrats in the House and Senate who want to do that, I think we will. I trust that the president, given all that the country is facing, will want to do that too."

Some contention regarding cap leniency comes from Democrats in Congress who are concerned that more defense spending may mean less funding for domestic programs.

While they may not be aware exactly how financial resources are being allocated, many U.S. citizens are calling for reduced defense spending in general. From the Pentagon's perspective, allaying the concerns of U.S. residents and legislators alike involves finding where capital can be more appropriately allocated. This measure can be undertaken by finding out where savings can be made - perhaps there are certain sub-departments that do not require as much funding as others.

Defense Industry Daily acknowledged estimations made by the Pentagon's Defense Business Bureau, an advisory entity that is dedicated toward providing expertise to senior leaders from a private-sector perspective. The bureau discovered $25 billion annual savings within DoD practices, most of them in procurement, logistics, property management, human resources and health care.

While the military does not operate the same way as private firms do (the latter of which make top-to-bottom changes designed to improve efficiencies), the Defense Business Bureau's analysts did note that renegotiating contracts, cutting personnel, modernizing IT assets and re-engineering "business" processes can result in the savings highlighted above.