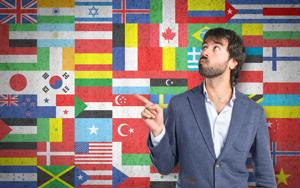 Many people in the United States were required to take a foreign language in school. They may have chosen French, Spanish, German or even Latin in an attempt to ace their SATs. However, once graduation rolled around, how often were those skills put to use? A lack of knowledge of foreign languages may actually impede the American supply chain. With the multitude of cultures comprising the nation, as well as American companies' numerous business dealings with other countries, the need for a foreign language education is prominent.

Business dealings require multilingual skills
The U.S. is a melting pot of cultures. The country was built on the belief that people from anywhere in the world can come to America to follow their dreams. However, there may be an obstacle to those accomplishments - the language barrier. When people come to the U.S., they bring their linguistics with them. According to a U.S. Census Bureau report, of the more than 290 million Americans aged 5 and older, approximately 21 percent speak a language other than English at home. While many of those people know Spanish, others speak a variety of other languages, including Italian, Chinese and Arabic.

This can interfere with communication between people of different cultures both at work and at school. It's the general expectation that new inhabitants will learn English because it's the dominant language. However, this rule should go both ways. Native English speakers should learn a second language to improve their communication with co-workers, peers and business associates. Many of the larger corporations may conduct business overseas, but that becomes nearly impossible if employers and workers don't learn the language. Learning another language or culture will show people that you value their backgrounds, LinkedIn contributor Mac McIntyre explained. While you might not be fluent, using even a few words and phrases can go a long way toward building trust, breaking down barriers and improving the supply chain.

Starting language education early
While it's possible to learn a new language as an adult, this can be more difficult than it is for children and young adults. Regardless of age, acquiring the knowledge of a second language offers countless benefits, The Telegraph noted. The practice can turn you into a better critical thinker, boost creativity, improve multitasking, increase cognitive function and even expand your understanding of the English language.

Historically, only college-bound students learn a language, Great Schools claimed. Unfortunately, this leaves the rest of the population at a disadvantage. In today's diverse society, it is crucial that everyone can communicate with one another at all employment levels. Whether you're a chief executive officer or a line worker, you need to be able to talk to the people around you and at all points in the workflow, and they may speak different languages.

"We're talking now about what is it we really want our students to do," Paula Patrick, foreign language coordinator for the Fairfax County, Virginia, public school system, told the source. "It's no longer a check-off to college admission. It's a tool for communication."

Language barriers can create problems along the supply chain. Employees won't be able to communicate with one another, their bosses, suppliers or clients. For both local and global sourcing, businesses need workers who can negotiate with others regardless of the language they speak. By teaching second languages to people before they enter the workforce and then encouraging them to regularly brush up on their skills, companies will be able to create businesses that are open to everyone no matter their backgrounds.
Procurement News