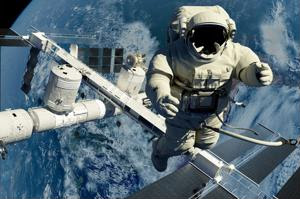 Zenon Carr made living in space seem like a piece of cake. The "Girl of the 21st Century" could easily travel from the space station to Earth nearly as effortlessly as you can travel to the grocery store.  While the Disney TV movie may have idealized intergalactic living, it could very well be a possibility in the distant future. With a few changes to the supply chain, getting people and goods from the ground to the moon may not be too far away.

Testing for safety
Every space mission needs a rocket ship. Astronauts won't get anywhere without one. However, it can't be any spacecraft you see in movies. So missions don't end up like Apollo 13, manufacturers need to ensure their ships are fully operational. Just like with any vehicle on Earth, these modes of transportation need to undergo rigorous testing and evaluations. Unlike cars, however, rockets cannot easily get help if something goes wrong.

Three astronauts had to delay their voyage to the International Space Station because of a failed cargo mission to the same destination, Agence France-Presse explained. In April, the cargo ship lost all communication with Earth and burned up in the atmosphere. Russia, which had built both the lost vehicle and the new one, proceeded to ground all spacecraft until it could determine the problem and evaluate the rest of the ships.

"Right now we are very, very ready," Japanese astronaut Kimiya Yui explained to the source. "I know that the Soyuz is a very reliable, safe ship. I believe that our launch will be the safest launch ever."

With all tests occurring throughout the supply chain and before use, the spacecraft should theoretically experience no problems.

Expanding the supply chain
Space travel is expensive. According to an infographic from Florida Tech University Online, one mission costs $450 billion. Unfortunately, the supplies needed for these trips don't help the costs. Just one gallon of water requires $690,000 to send it to the moon. If astronauts at the International Space Station need to replenish their stocks, they'll have to figure in the time and money it will take to get items to them.

Unlike Earthlings, who can easily receive products they require for generally reasonable prices, space voyagers require a much longer supply chain. Purchasing goods isn't as simple as going to the store. However, Jason Dunn, the chief technology officer at Made in Space, believes he may have the solution. Last year, his company sent a 3-D printer to the International Space Station to experiment with manufacturing products on-site as opposed to shipping them from Earth, Manufacturing.net reported. The printer can receive orders from the ground and create the objects for the people in space.

Dunn and Made in Space wanted to create a system that would allow astronauts to have everything they needed. Initial packing for trips can only get them so far. The company designed a 3-D printer that would work in zero gravity.

Global sourcing may have its own problems, but intergalactic shipping has issues too. Supply chains need to run smoothly both on the ground and in space to allow for safe and efficient missions. If this is accomplished, then people may be living like Zenon soon enough.