Beer: The new breakfast of champions? 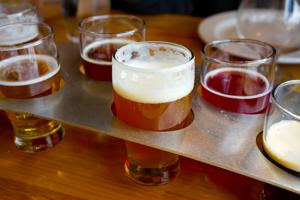 As the Pawnee Parks and Recreation Department's most dedicated employee Leslie Knope once asked, "Why would anybody ever eat anything besides breakfast food?" The "Parks and Recreation" TV character may have had a point. There are many foods and beverages that would be considered breakfast food. Eggs and pancakes make the perfect main dish, while bacon, sausage and hash browns complement them to perfection. Maybe you'll have a glass of orange juice or a mug of steaming coffee to wash it all down. For the more untraditional breakfast eaters, cold leftover pizza and water may alleviate the hunger.

However, even Knope may not have considered having the newest addition in the morning. Food manufacturers and breweries have blended their supply chains to bring consumers breakfast-themed beer.

The sugary goodness of breakfast on tap
While the alcohol isn't necessarily meant to be drank at breakfast, it is styled after some of your favorite morning treats. You'll still have to make your own bacon and eggs, but you may soon enough be able to find the sweetness of cereal and pastries in bottles.

General Mills has partnered with several breweries around the United States to bring you a delicious treat for many occasions. Recently, the manufacturer has teamed up with Fulton Brewery to create the breakfast of champions in liquid form. HefeWheaties will be available in the Minneapolis and St. Paul, Minnesota, regions by the end of the month, according to The Associated Press. While the beer isn't made with the cereal, it is modeled after the wheat ingredients.

The breakfast corporation has also contributed its sweet Count Chocula cereal to Colorado's Black Bottle Brewery's Cerealiously Count Chocula ale. Last October, the beer producer bought out its local store of the breakfast treat, The Coloradoan reported. This time, General Mills provided the supply the brewery would need. Black Bottle plans to re-release the beer on tap on Aug. 25 and the drink should appear in bottles around Halloween. The brewery has used Golden Grahams and Cinnamon Toast Crunch in previous recipes, according to Fortune magazine.

However, cereal isn't the only breakfast food you'll be able to drink. San Francisco-based 21st Amendment brewery's new beer gives a nod to Kellogg's Pop-Tarts, the source explained. Toaster Pastry, an India Red Ale, contains 7.6 percent alcohol by volume in each 19.2-ounce can. The beer comes with the bitterness of an IPA, but the sweetness of the processed treats, which may make an interesting combination, according to the source.

The cure to what ales you
These new alcoholic creations may bring a new crowd of breakfast lovers to companies' audiences, which may be beneficial in many ways for some. General Mills' sales have not been as high as they once were. According to Euromonitor International, U.S. sales have dropped from $63.7 million in 2009 to $19.4 million in 2014, The Associated Press reported. This partnership with Black Bottle and Fulton breweries may help increase the company's revenue.

No matter what sales are like for any business, the shared venture between breakfast companies and breweries has extended the supply chain. Both manufacturers may reach audiences they would not have appealed to otherwise. Breakfast lovers may be drawn to the sugary alcohol, while beer drinkers could find they enjoy the taste of certain cereals. This has opened new avenues for these companies, and may redefine the way consumers view breakfast.