Home Marketing Don't Get Angry, Get Global: Is Angry Birds the Next Disney?

Don't Get Angry, Get Global: Is Angry Birds the Next Disney? 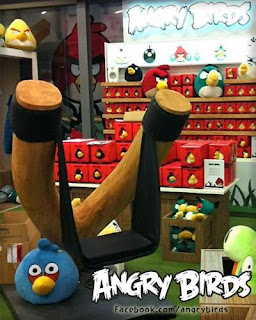 If you haven't heard of Angry Birds by now, you must be one of the pigs hiding under a rock that a sling-shotted angry bird is about to destroy. But if Rovio, the company that created Angry Birds, executes on its plans, many more people around the globe will hear about them, and Angry Birds will be everywhere.

Angry Birds is currently enjoying its second birthday, and Chief Marketing Officer Peter Vesterbacka, known as the "Mighty Eagle," is celebrating by declaring that he would like the brand and the company to be as big as Disney someday. "Disney is a good role model for us," he said Thursday at Business Insider's Ignition Conference in New York, covered by TheStreet.com. "They're doing a lot of things we want to do."

Rovio sees China as the core of the expansion strategy. Angry Birds has been downloaded 50 million times in China, and Vesterbacka is hoping for 100 million in 2012.

The company is making its money on ancillary merchandising of plush toys and clothing items, and has plans to expand into cookbooks and playground equipment. They are even in pre-production for a 3D movie with 20th Century Fox. Vesterbacka's wife recently made headlines by wearing an Angry Birds-themed gown to an official Finnish state dinner.

Of course, such an explosive brand is a magnet for pirates, especially in the Far East. TheStreet.com reports that "Angry Birds is also the most copied brand in China, Vesterbacka said, but it's something the company has embraced. 'We look at fake Angry Birds products and we pirate the pirates,' he said. 'We make a lot of those into official merchandise -- there's a lot of cool innovation happening there and they're making products we never thought of.' Rovio plans to open its first retail stores in China this year to counter the dozens of unlicensed outlets that have sprung up."

Thus Rovio is hoping to slingshot its brand into fame and success levels currently enjoyed by Disney within ten years. Can they do it, or is it just a passing fad? While everyone from kids to adults to seniors are downloading and enjoying Angry Birds, it remains to be seem if Rovio can monetize the brand. Case in point: Justin Bieber, who was smoking hot just a couple of years ago, is now seen by many of his core audience of young girls as "soooo last year." Can Angry Birds avoid that fate?

While Rovio is currently experiencing exponentially-increasing growth, Angry Birds' sigmoid curve of growth will flatten out eventually. This is the point at which initiatives like a solid strategic sourcing program become essential. While the money is flying farther than an accelerated yellow bird, all is good, but once Rovio starts having trouble clearing their next level of marketing challenges, they will want to look for ways to engage in creative cost reduction to be better able to sustain their growth and profitability. They'll need a black bomb bird to explode the accreting creaky structure of unexamined costs generated by runaway growth, which is hiding several bloated expense pigs. At that point they won't just be angry birds - they will be a powerful global brand.
Marketing