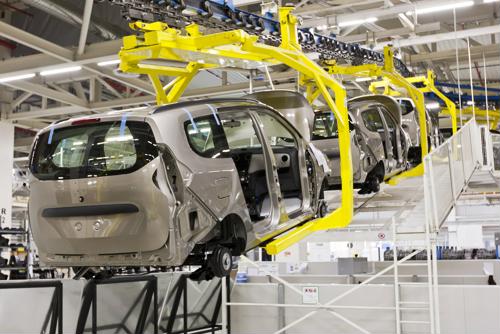 Supply chains of all types, touching just about every industry around the world, are still very much in recovery mode post-pandemic, and it's an issue that isn't going to resolve itself anytime soon. One sector where this is a problem on multiple fronts is automaking, because a host of issues have come together in recent months to create unique challenges for companies large and small.

The issue starts well before even reaching an auto assembly line, too, because even the companies that make components for those vehicles are experiencing issues when it comes to supply chain transparency, according to Auto News. And, like vehicle manufacturers themselves, they also experienced shutdowns early in the pandemic that, in turn, created backlogs that were difficult to work through.

Meanwhile, this industry (among numerous others) has suffered through a global shortage of microchips that made it far more difficult to manufacture automobiles at high volumes, and unfortunately, this problem is expected to last at least through the end of 2021, the report said.

"I think suppliers are navigating more than they ever have," Julie Fream, CEO of the Original Equipment Suppliers Association, said at a recent industry panel, according to Auto News. "Surprisingly, 2021 has become a more challenging and difficult year for suppliers than even 2020 was. At that point, the industry went down and then we came back up. But it is such a challenge to navigate all of these individual areas that are causing concerns and problems for suppliers."

Other issues
At the same time, a number of companies are dealing with labor shortages that make the kind of production goals they need to hit with all this backlog even more difficult to reach, according to Freightwaves. This is true not only when it comes to actually producing the goods needed to get more cars rolling off the line, but also when it comes to delivering those components in a timely fashion that allows supply chain partners to keep hitting their goals.

Addressing the issue
With the above in mind, some federal lawmakers are now trying to bolster the automotive supply chain through new legislation, according to the Detroit Free Press. U.S. Sens. Debbie Stabenow and Gary Peters, both Democrats from Michigan, recently worked to set aside an extra $2 billion in funding to boost domestic semiconductor production. While the benefits are likely to take some time to come to fruition, the idea here is to buttress supply chains and processes so that future shortages have a potentially diminished impact within the U.S., and to the wider world overall. Stabenow also told the newspaper that it's important for manufacturing in Michigan (and beyond) to not only keep improving automotive output, but also to boost manufacturing of other items such as furniture and appliances.

The more companies can do to forecast their production needs several months or more in advance, based on all the high-level data they can generate and interpret, the better off they will be when it comes to weathering supply-chain storms going forward.