The SOPA and PIPA Blackout 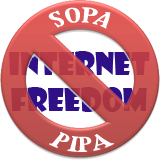 Over the past couple months two new laws were proposed by US legislators, the Stop Online Piracy  Act and Protect IP Act. As of today, January 18, many websites are taking their stand against this act and are beginning to protest by blacking out information.

The main objective of the SOPA act is to limit copyright infringement and Internet piracy on the web by giving US government unprecedented new powers. Thousands of websites are going dark today to protest against this Stop Online Piracy Act. Some believe the reaction of this act could threaten the functionality of the Internet. SOPA would give both the government and major corporations the power to shut down entire websites accused of copyright infringement without going to court.

According to Vlad Savov of The Verge, "the most outspoken protester of the bills today will be Wikipedia, whose English site will be going dark for the full 24 hours on January 18th." On Wikipedia's explainer page today the nonprofit organization states, "we are protesting to raise awareness about SOPA and PIPA solely because we think they will hurt the Internet, and your ability to access information online. We are doing this for you, because we are on your side."

Other websites who are participating in this protest are:

With this said, it is important to keep in mind that the Internet is a key resource to every industry. I wonder what would the impact be to procurement if SOPA was passed in its current state. For example, Alibaba or other major supplier directories may have a user that links to an authorized place or has an uploaded image of a trademark without permission. If someone would report this mishap, the whole site would be taken down. Any site that would be found of copyrighted material would be vulnerable under these acts. It is often hard to keep track of making sure you do not "accidently" post copyrighted material without permission on sites such as Wikipedia and Google.
Trending