Home Humor Rants Observations IT Space Shuttle: The End of an Era, or the Beginning of One?

Space Shuttle: The End of an Era, or the Beginning of One? 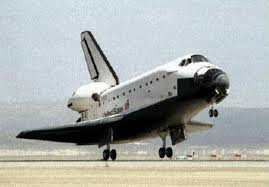 Space Shuttle Atlantis achieved "Wheels Down" for the last time yesterday. This has been accompanied by much wailing and gnashing of teeth, but actually, it is long past time for this co-dependent relationship between the federal government, in the cloak of NASA, and the military-aerospace-industrial complex to come to an end. President Bush, then President Obama, had the courage to conduct an intervention and break the addiction to "business-as-usual." Now perhaps we can get around to the real Space Age.

I find it exceedingly ironic that it is often Republican politicians, who love to give lip service to the power of "the invisible hand" (go look up Adam Smith on Wikipedia) of the free market, are some of the staunchest defenders of the old guard aerospace contractors, while the "socialist" Obama is the one who, with brilliant advice from NewSpace counselors, has held the course to change the course of America's foray into space.

I will bet that most of those reading this have never heard the term "NewSpace" before. It is a term coined by the Space Frontier Foundation to distinguish between private enterprise heroes who are building a true and sustainable spacefaring capacity and the "OldSpace" aerospace contractors who have been sucking at the government teat for at least as long as the Shuttle program has endured.

Those NewSpace heroes include visionary entrepreneurs like Elon Musk, who made his fortune by creating PayPal, and is now sinking his money and talents into SpaceX. The company has launched a privately-funded rocket into space, which carried an astronaut-capable capsule to orbit, then was safely returned to Earth. This is the American vehicle which will take astronauts and supplies to the International Space Station within a year or two. But such development was never going to happen while the government was focused on keeping the massive jobs program known as the Space Transporation System (Shuttle) on life support.

Another hero is Jeff Bezos, of Amazon.com fame, who is building a private rocket on his ranch in Texas. He is not doing it for publicity; in fact, it is next to impossible to get news of progress. The world will learn of it, no doubt, when the vehicle is launched into space.

Richard Branson, the Rebel Billionaire, is another champion of NewSpace. He is building Spaceport America in the New Mexico desert, where, if you have $200k to spare, he will launch you in a suborbital joyride to view the wonders of our blue planet and enjoy the rapture of weightlessness for a few minutes. "Toys for the rich," you scoff, but that's exactly how much of our indispensible technology started, from phones to cars to refrigerators to computers and many other "must-have" devices and systems.

This is all as it should be. Rick Tumlinson, one of the founders of the Space Frontier Foundation, puts it this way: "It is long past time for us to try something different, as what we have been doing in our human space program since Apollo has been a failure of epic proportions. And yet, some defend the status quo and are actually angry about the coming changes proposed by the Obama Administration.... It is heretical to say it in many quarters, but unlike its astronomy and robotic exploration programs, the current NASA operated human spaceflight program has failed by any rational measure in almost every respect to achieve Any of the milestones put forth by those who sold them to the American people so long ago.... Rather than seeing itself as the emperor of all things space, it [NASA] will have to change how it views the zone from the Earth’s surface to LEO. The agency simply cannot get it right when it comes to trying to build its own launch systems in any economic sense, and it is time it stopped trying. The agency will have to step aside in this area that it long ago pioneered. It will no longer be its own trucking service for small package delivery to space. It will have to relinquish its role as its own taxi service to LEO and leave the driving to someone else. Instead this job will be given to privately funded New Space firms across the nation that are working on a variety of rocketships that could catapult us into the space frontier and global space leadership at a fraction of the cost of any new NASA system." http://spacefrontier.org/2010/03/19/change-is-coming-to-nasa-space-launch/

So before you start weeping and wailing and gnashing your teeth about the demise of the Space Shuttle, keep this in mind: you were never going to get the chance to ride on one, which is not the case with the NewSpace offerings. This time around, we all get to go, if we want to.
Humor Rants Observations, IT