Home Communications IT The Smartphone Lineup, Alternatives to BlackBerry

The Smartphone Lineup, Alternatives to BlackBerry

William Dorn on Wednesday, June 25, 2008 Communications, IT,
In today’s fast paced business environment, it is essential for many people to keep in constant contact with their office and their supply chain. It is now common to see most business professionals “tethered” to their office via electronic devices such as BlackBerry, Windows Mobile, Symbian, or the iPhone (though the iPhone is not yet where it needs to be for an enterprise solution). 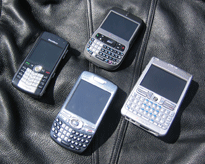 Blackberry continues to dominate the US enterprise marketplace. According to IDC, the first Quarter of 2008 shows that RIM took 44.5% of the total U.S. marketplace for smartphones. The second in sales was the Apple iPhone holding 26.7% of sales, however it can easily be argued that the vast majority of Apple’s sales were consumer not enterprise users. On a global level, Symbian OS dominates the marketplace, while Windows Mobile owns slightly more market share than RIM’s BlackBerry (13% vs. 10%). Symbian’s domination is due to the fact that Nokia (the world’s largest manufacturer) prefers to deploy it on the majority of its devices.

With Blackberry only owning 10% of the world’s marketplace, it seems a bit odd that it still holds such a dominate share of the US marketplace. In my opinion, this is mainly due to name recognition, and first to market with a truly integrated device. I am a user of a Windows Mobile device, yet everyone that sees it still asks what kind of Blackberry it is.

My point is that the name recognition of the Blackberry itself probably accounts for the fact that it is the main device that is deployed in most enterprises. What really surprises me though is how many IT managers I have met that were not even aware that you can accomplish much of the same things a Blackberry can do without owning a Blackberry or paying for their software/services. Windows Mobile and Symbian both have the ability to integrate with Exchange Servers, and WinMo even supports push synchronization (where the emails are pushed to your phone, you do not have to retrieve them). Additionally, most enterprises already have the licensing and equipment in place to support deployments of WinMo without purchasing anything other than the device itself.

For those of you looking to upgrade existing smartphones, or perhaps to deploy them for the first time, there really is a lot to consider. I suggest engaging the help of a third party to help you make the decision. If you go at it alone, don’t take the marketing literature of each solution verbatim. A quick evaluation of RIM’s published cost comparison has many misleading costs built in to their competitor’s solutions that the vast majority of enterprises would never have to absorb. Basically, their cost comparison assumes that your enterprise is running on 9 year old technology, and you would have to do a complete upgrade. The fact is, most enterprises are already standardized on later technologies (i.e. Exchange 2003) and would not need to acquire the majority of the software/hardware that RIM says you need to run competitive solutions. Each of the vendors is guilty of comparing apples to oranges, so make sure you do a lot of research, and evaluate each alternative carefully.

Below are some of my quick thoughts for each of the competitors that I have used:

My personal overall preference is the Windows Mobile (Microsoft) Devices. Although the interface leaves a lot to be desired, it serves its main purpose very well, which is to keep me synchronized to my office computer for a low cost.

Click here to learn how Source One can help manage your wireless spend and infrastructure.