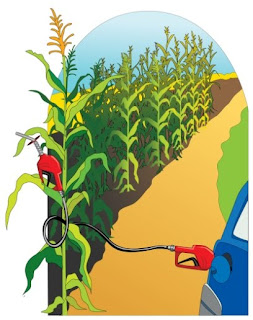 Nothing beats your local corn-on-the-cob as we continue through the summer grilling season (heat wave or no heat wave!). I’ve heard corn is good for you being that it’s a vegetable but also that it has no nutritional value and the human body cannot digest it like other vegetables.

Just as with corn-on-the-cob’s healthy vs. unhealthy views; ethanol is under the microscope for being a fit fuel replacement or not. Ethanol is a form of alcohol distilled from the sugars found in a wide variety of plants as cited in the July/August 2010 issue of AAA World. Using ethanol as an automotive fuel has been around since Henry Ford’s Model T in 1908 which was designed to run on ethanol, gas or a mixture of two for example. Now we have flexible-fuel vehicles which can run on a more concentrated blend of ethanol and gas (85% ethanol, aka E85) than 10% or less ethanol blend before. But is it worth having a car or truck that takes E85 when less than two percent of gas stations nationwide sell it?

According to the editor of the Edmunds.com Green Car Advisor blog, “After 9-11, everyone began worrying about energy security. So the big agribusiness companies began selling the idea of producing ethanol from corn as a way to reduce America’s dependence on foreign oil.” Enter ethanol greenwashing. Auto manufacturers started producing millions of cars that take E85, mainly to help meet federal government Corporate Average Fuel Economy requirements. I’m sure many people felt they were doing their part to help the Earth and reduce emissions with their flex-fuel vehicle purchase. But how many of these vehicle owners have ever filled up with E85?As in the sourcing world, one needs to be cognizant of total cost of ownership. Jan Kreider, a chemical engineer and professor emeritus at the University of Colorado noted as an example, “our recent life-cycle analysis of a number of alternative fuels showed that using corn-based ethanol actually increases CO2 emissions and uses about 30 percent more imported oil when you factor in the diesel fuel consumed by the farm machinery used to grow the corn and the trucks and trans that transport the finished product.” Not to mention the massive amounts of land, water and fertilizers needed to produce the raw materials.

When Jan puts it like this, it's hard to disagree that the corn-based ethanol being produced may be worse for the environment than the gasoline it's meant to replace.
Best Practices